CW (continuos wave) is the simplest operating mode in terms of technical efforts.
You don't need a microphone, no complex speech conversion to different modulation types no computer, etc. A simple transmitter from a handful of components is enough. The receiver needs nothing more or even can be integrated directly into the transmitter. Just a few comonents and the world is open to you!!

Of course one has to learn Morse code. Nobod will understand the beep-beep-beep by itself and it takes a little patience and staying power to master it that way, that you can handle a first QSO. But then your heart goes pop:
For first time you get contact with another amateur, he answers, you have got the f...ing difficult call sign (not complying to any rule at all), you copied the name of the oposite operator and even the QTH! My God, now he wants to know what key and what station you are using. Where is the cheat sheet with the notes?! Searching cheat sheet, listening and writing eat the same time: the sweat flows in streams. But at last it is done: All information has been sent, weather and greetings have been exchanged, now
"vy 73 = tu tu e e"
Puhhh - what an effort and how wonderful!
This probably happened to many operators in the same way. With any luck, they had a nice OM on the other side. He decresed the speed and repeated without grumbling or growl his name and his QTH a few times very, very slowly. There are still many such OMs thank God. Nothing is more frustrating for a beginner, than when his pleading "QRS pse" (please slow down) is answered to even faster giving fron the oposite side with the consequence that he can not copy anything but (perhaps) single letters.

The amateur radio and especially the CW mode urgently need new blood. Though beeing an immaterial world cultural heritage it is endangered to die out - like amateur radio is too.
That's a great pity, but today everyone can use the mobile for a few cents to phone around the world. So - why should anyboda care about amateur radio or even learning and practize Morse code?
The answer is simple: IT IS FUN!
And because when things really get tight you don't need any infrastructure to be able to call for help in any case of emergency. You need neither a cell tower nor a satellite - just a few components and a piece of wire.
And why Morse code instead of voice radio?
Again: BECAUSE IT'S FUN!
And because you need very little power to transmit a morse signal over large distances.
And because you can still copy it when there is nothing left of voice transission but a "shhhhh...".

Morse Keys / - types (kick)
There are numerous types of Morse / cw keys. All of them have their individual advantages and disadvantages. Which one to decide for? The answer is easy as with everything in life: Take that one you like most and that provides the maximum fun to you.
Here is a small overview on some keys. 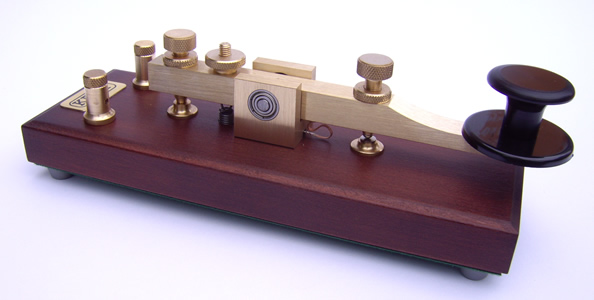 This is the "standard morse key" with a lever that is moved up and down. During a downward movement the contact is closed and during the following upward motion opened.
If you press the key for a long time, a dash ("Dah") is generated.
If you press only briefly a point ("Dit") is created.
The characters are formed by hand. There are telegraphers with very individual handwriting, but most operators generate classical, accurate and "clean" code.
This key is easy to learn and very suitable for beginners. If you have mastered this one you should have a good basis for all other keys. 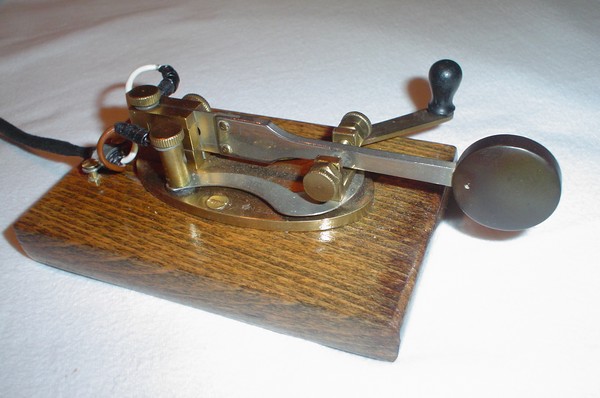 These keys have only one lever, which is moved sideways.
If the lever is moved to the left or right, the contact is closed.
In the middle position the contact is open.
The characters are formed by long ("Dah") or short ("Dit") press. Since all the movements is done sideways one can send faster and, above all, it is much more fatigue-free than with the straight key.
There are many different ways of forming the code:
Classical Style
You always move your hand back and forth, regardless if a stroke or a point is formed. It always goes ... right - left - right - left...
This is the classic way of operating a cootie.
Paddle Style
This is comparable to operation of an electronic key:
Letters that start with a stroke are always started with the thumb.
Letters that start with a point are always started with the index finger.
(or vice versa) and then again like described at "Clasical Style" alternately ... right - left - right ...
Same Start
Each character always starts on the same side e.g. with a movement to right (or left), then the movemant is alternated between left and right again.
Pseudo-Random
The OP has adopted an individual style. He starts the one letter on the left and the other on the right. But what he does is reproducible.
Instinctive giving
OMs with this style can't tell you what they're doing.
Usually they send at hight speed and when they try to show how they it, they get confused and the code gets bumpy or even totaly breaks .
When using a cootie all operating styles have one thing in common:
The code usually has a typical and individual handwriting.
Although almost all cootie operators can give very acurate, they have their handwriting and after a few characters you can say "Aha, this is om ..." without even having heared his call sign.
Important Addendum: 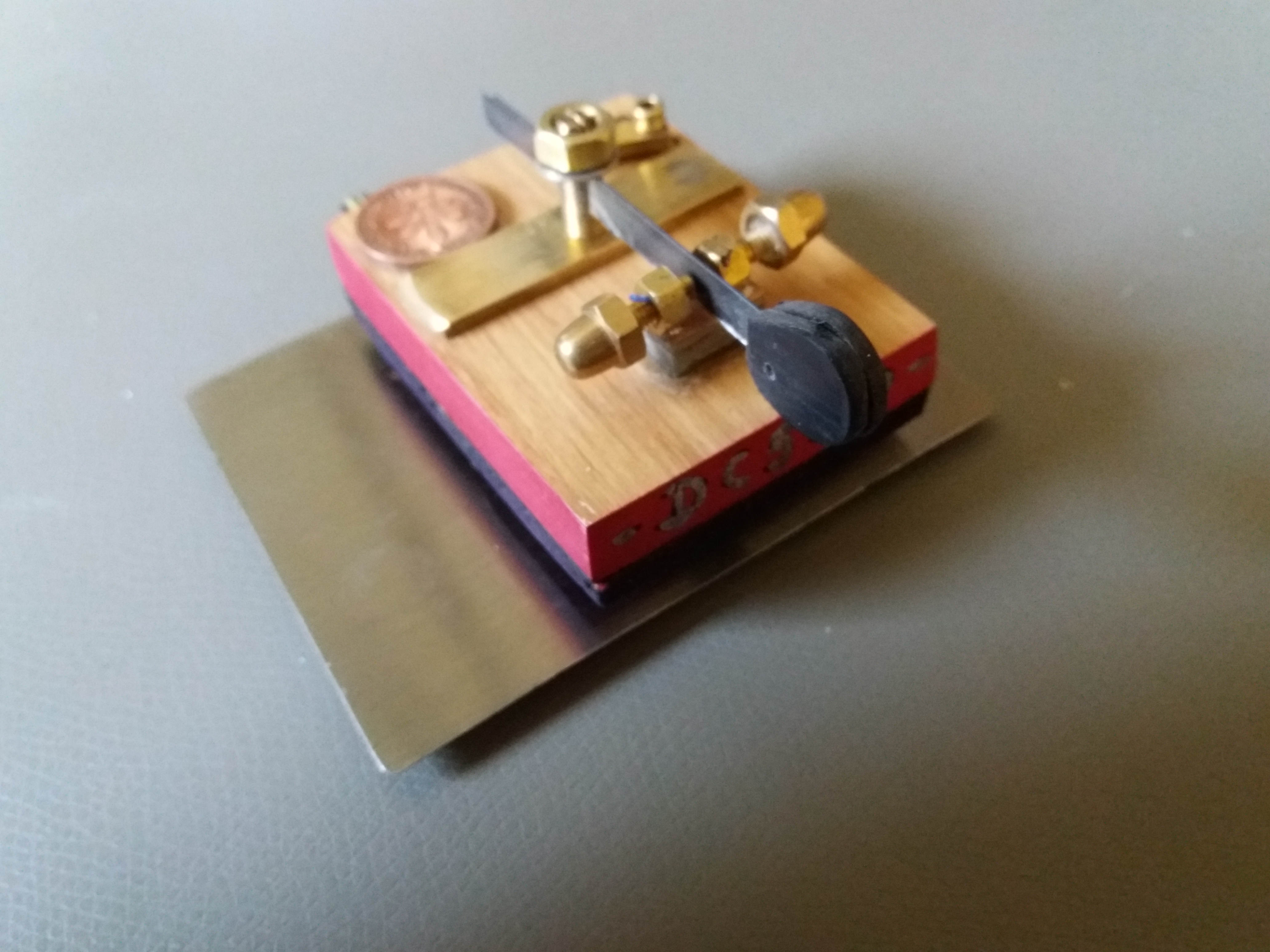 This SideSwiper was built by PA3BYW, Durk himself and was presented to me as a gift.
Now that I've been active for a few years in the SSN (SideSwiperNet) Druk thought it was about time that I finally start to "sideswipe" too.
An impressive proof of HAM spirit, the friendship and the collegial spirit that radio amateurs cultivate among each other. 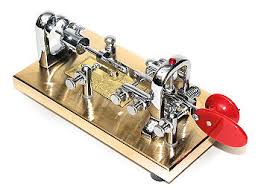 These keys also have only one lever, which is also moved sideways, like it si done with a sidesswiper.
BUT:
The points are generated by a mechanism. Pressed only once the key itself creates a series dots until the op releases it. The strokes are formed "by hand": the longer one presses, the longer the dash. True marvels of mechanics and difficult to master.
Almost inevitably very individual styles emerge.
The english name "Bug" (= error) comes from the fact that you will gererate no morse code but a total bullshit if you don't know how to operate this key.
The strokes are all but exactly 3 times as long as a point and either you generate too many (this is prefered by me) or too less points.
I never got it... ;-( 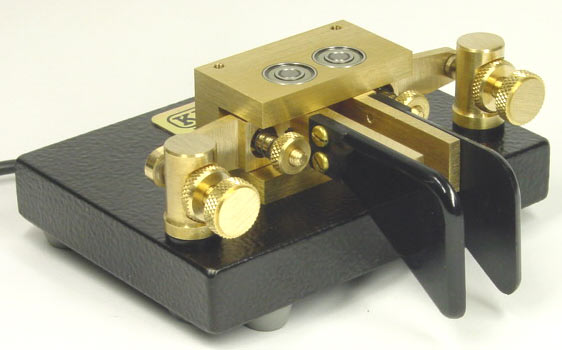 These keys have two levers which are independently operated sideways into the center. They always require additional special electronics. That one constantly generates dots or strokes as long as one of the levers is pressed: permanent pressure from the
--> left side creates dit-dit-dit...
<-- right side creates dah-dah-dah-dah...
until the lever is released again or vice versa, depending on how the electronics is set.
Pressing both levers simultaneously generates points and dashes alternately. The key then automatically makes "...dit-dah-dit-dah-dit-dah-..."
Sendig a "c" is very simple: both levers are pressed and kept together and the elcotronics wil create "dah-dit-dah-dit" - a perfect "c". ybr> The electronics too ensures a very precise timing. Individual characteristics are hardly to be recognized (the electronics is as precisely as a clockwork, dots and dashes are always exactly in the ratio 1:3, the pauses between dots and dashes are also accurate and even the spacing between words is correct).
This key is the one to achieve highest speeds with. The world record is more than 360 characters per minute, which is more than 6 letters per second!! This speed sounds like this: Audio sample 375.5 bpm

So that's it on operating mode cw. For all those who want to learn it, the sections "Links" and "Downloads" on this page may perhaps be helpful. And Goooogle will help too of course.